While we originally started looking into Costa Rica because we had read a lot of hype about how inexpensive it is to live there, we found that many things are less expensive than in the U.S., but some things cost considerably more than they do in Tucson, Arizona, where we currently live. 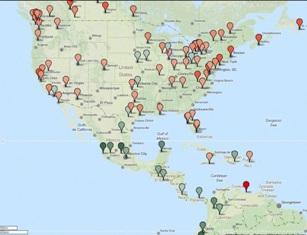 Here is an interesting map which shows the Consumer Price Index (CPI) for various cities all over the world. The green markers indicate places where the CPI is lower and the red markers indicate higher CPI’s. You’ll notice that several cities in the U.S., including Los Angeles and Akron, Ohio, have CPI’s that are comparable to that of San Jose, Costa Rica. And you’ll find that many cities in Mexico, Central America, and South America have CPI’s that are considerably lower than San Jose’s. If your main motivation is finding an inexpensive place to retire, then you may want to consider retiring in a country that has a lot of dark green markers.

We found that once you get out into the more rural areas of Costa Rica, not only does the cost of living go down, but the beauty and the slower pace of life really appeal to us. And by making the right lifestyle choices, you can live a simple, affordable life. Some of the helpful people we’ve met during our exploratory trips to Costa Rica are living that life, and they are very open about sharing how they do it as well as their monthly spending history.

Here’s a link to an interesting tool that allows you to compare costs of several different products and services between two cities that you choose. Just enter your city in the U.S. and choose from a number of different cities in Costa Rica. You’ll probably see that many products and services are less expensive in Costa Rica. But some items like gasoline and bottled water are considerably more expensive in Costa Rica. The Numbeo site has a lot of other interesting maps and charts. If you’re a statistics geek, like I am, you may want to spend some time perusing the site.