Deciding where to live in retirement is one of the most important decisions you’ll make. You’ll need to start with a list of things that are important to you, find some towns that meet most of your criteria, and then spend some time in each town to experience the weather and the lifestyle for yourselves. You’ll find a list of questions to ask yourselves and the criteria we used at Where to live We have narrowed our short list down to Palmares, San Marcos de Tarrazu, Tilaran, and somewhere between Dominical and San Isidro de el General. We plan to rent before we buy, so our selection may come down to which of our favorite areas has the best rental available at an affordable price when we are ready to make our move. Our list of featured towns below also includes some other popular expat retiree destinations that you may want to consider. 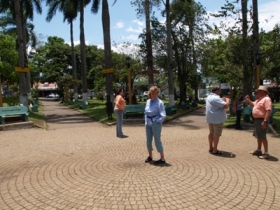 Atenas is a charming town located about 25 minutes from Juan Santamaria Airport (SJO) and less than an hour from Doña Ana, a beach on the Gulf of Nicoya that is popular among expats. Many claim that Atenas has the best climate in the world. The town has a vibrant expat community, numerous cafes and restaurants, and a wonderful feria (farmer’s market) on Saturday mornings.

We love going to the beach, and Joe is keen on surfing, but we don’t want to live near the ocean where prices are higher and air conditioning is a must. As you travel inland from the charming beach town of Dominical, the mountains rise sharply, so you can live where it’s cooler and be at the beach in Dominical or shopping or dining in San Isidro de el General in about 20 minutes. 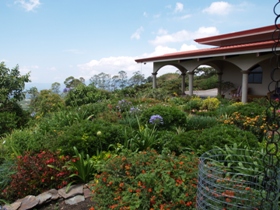 Beautifully landscaped home
in the hills near Grecia

Grecia is known as the cleanest city in Central America. It is also renowned to have one of the biggest and nicest ferias (farmer’s markets) in the Central Valley, and we observed a lot of bicyclists on the roads on the Sunday morning we spent there. Many expats have chosen Grecia for their new home, and there are numerous housing options with American-style amenities. 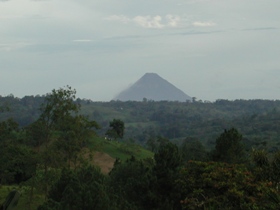 Nuevo Arenal is a small town on the shores of Lake Arenal, one of the most picturesque areas in all of Costa Rica. Beyond its scenic beauty, the weather there just felt good on our skin. The town of Nuevo Arenal has several excellent restaurants and an active and helpful expat community, many of whom meet for breakfast on Thursday mornings. 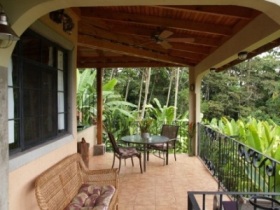 If living near the beach is not important to you, then the Orosi Valley, which lies midway between the Pacific and Caribbean coasts, may be your perfect retirement spot. We spent three nights in Steve and Nancy Riley’s beautiful villa. The weather and the views were delightful. Chad Randolph of the Adventure Lodge took us on a full day tour of this stunning valley. 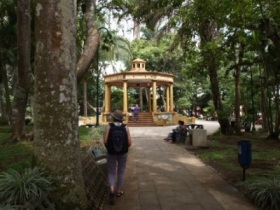 Palmares is our favorite town in Costa Rica’s Central Valley. The centro is the loveliest of any we’ve seen in Costa Rica, and the people in this largely Tico town were incredibly friendly. Children (even teenagers!) came up and talked to us while we were sitting in the park. We felt very comfortable in Palmares, and a short bus ride to the larger city of San Ramon costs less than $1. 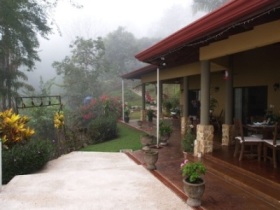 San Isidro de el General is a bit large for us, but there is so much to love about this beautiful area. We love the weather and the proximity to the beach (just 36 minutes to Dominical), and San Isidro has the largest and nicest feria we’ve visited in Costa Rica. We cherish the friends we’ve made in San Isidro, and prices in the Southern Zone still seem very affordable. 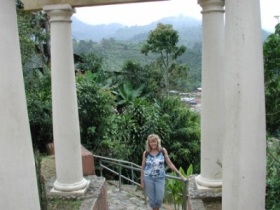 We absolutely love San Marcos de Tarrazú which is in the heart of Costa Rica’s prime coffee-growing region. Beauty abounds, and we enjoyed walking everywhere. San Marcos has a few restaurants, grocery stores, banks, a coffee shop, a bakery, a small weekly feria, and even a bicycle shop. We saw more bicyclists in San Marcos than any other place we went in Costa Rica. 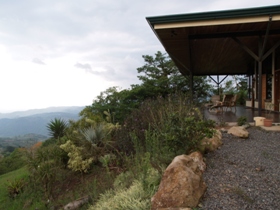 Home to a vibrant expat community, San Ramon has several restaurants and even a mall with a movie theatre. The mountains around San Ramon have a rugged sense of beauty, and you can choose the elevation that suits you best. Many homes have American-style amenities, and some have sweeping views that extend all of the way to the city of Puntarenas on the Gulf of Nicoya. 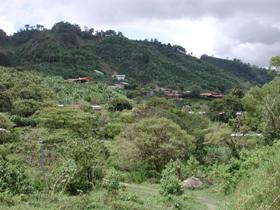 Neighborhood in the mountains
outside of Santa Maria de Dota

The picturesque village of Santa Maria de Dota is located about 10 minutes from San Marcos de Tarrazú. It is home to the Coopedota where we drank some of the best lattes ever! After coffee, we enjoyed lunch and a taste of the simple life at the home of our friends Larry and Cindy Windes who live in the nearby mountains. We hope to return to spend time in the town itself someday. 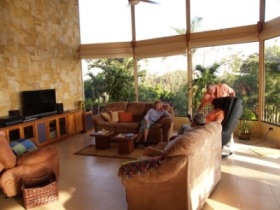 The small town of Santiago de Puriscal has excellent weather with days rarely reaching into the low 80′s. Puriscal has everything a small town should have including grocery stores, banks, restaurants (even an excellent Chinese restaurant!), a feria, and a small hospital near downtown. Our tour guide, George Lundquist, lives near Puriscal, and he builds affordable houses on view lots outside of Puriscal. 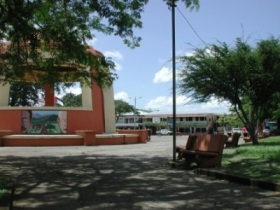 Tilaran is a Tico town on the southwest side of Lake Arenal. Even though Tilaran is the center of commerce for the Lake Arenal region, it has a laid-back, small town feel to it, and it has good roads for bicycling. Except for some Gringos we met while having lunch in a Mexican restaurant, very few of the people we encountered in Tilaran spoke any English.