We first connected with George Lundquist by email in the spring of 2011, and we have Skyped a few times and exchanged hundreds of emails since then. We finally took the plunge and went on George’s “Retirement Tour for the Non-Rich” in April of 2012, and we’re so glad that we did! George tells it like it is and doesn’t try to sugarcoat anything. He took us to several people’s homes, and they were all open about their lives in Costa Rica, how much it costs them to live there, their experiences with medical care, and so much more. Some of the people we’ve come to know and love in Costa are people we met on George’s tour. We’ve found George to be a wonderful resource on retirement in Costa Rica. Please provide your contact information so George will know we sent you his way, and you’ll be redirected to his website. 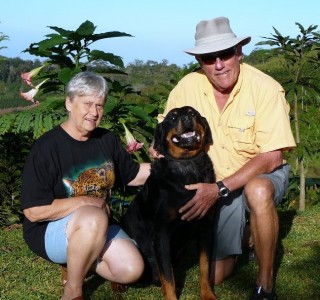 George Lundquist graduated from the University of Minnesota in 1965 with an AA in Electrical Engineering and a BA in Industrial Psychology. He worked at Texas Instruments in Dallas and then as the VP of Manufacturing for the Southern Division of Haggar Slacks in the Rio Grande Valley. After 13 years, it was time for a change, so he started his own business, Calidad Electronics, Inc. near the Mexican border. The business made a profit every year and earned placement in INC. Magazine’s 500 Fastest Growing Companies in the US for 1990 and 1991. He sold Calidad in 1993 and did freelance consulting for companies in the Telecommunications, Ready to Eat Meals, Powder Coating, and Bass Boat businesses. By 2001, after several successive non-producing investments, at 61 years old George decided to explore how to live on their Social Security income.

After living in one of the many beautiful rural areas of Costa Rica, he decided to start a tour operation to show others who might not want or need to live in a tightly gated, guarded, community with its high prices, heavy traffic, and materialistic, hectic lifestyle, how incredibly fun and healthy life can be. Along the way, he started building some homes, including the beautiful home where he and his wife Aija live near the village of Barbacoas outside of Santiago de Puriscal. This led to yet another successful career for George as a developer and homebuilder. George had so much fun doing the first project that he started a second, third, fourth, fifth, and is now working on his sixth project. In all, he has built 12 custom homes. All of this experience in land purchasing, design, development, and home design and development has given him a lot of exposure to how to do and NOT to do it. He openly shares his knowledge and experiences with his tour participants.

Please provide your contact information so George will know we sent you his way.