We met Paul and Gloria Yeatman on the first morning of our “George Tour” when they were living in the cabinas outside of San Ramon. We liked them immediately, and have kept in touch with them. Gloria has responded to my emails quickly, and with honest and well-thought-out responses. You couldn’t ask for better contacts to help you learn how to retire for less in Costa Rica! Gloria maintains a website dedicated to helping others retire for less in Costa Rica, and Paul takes people on custom day tours. Both of them share their experiences and even their monthly cost of living details, openly and honestly. Please use our contact form to visit their website so they’ll know we sent you their way. Thanks! 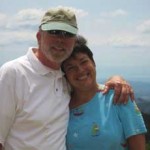 Paul and Gloria Yeatman were living in Baltimore, and they had been thinking about retirement for some time. They considered the southeastern U.S. and Mexico but eventually fell in love with Costa Rica’s unhurried lifestyle and warm, friendly people. They went to Costa Rica and did their due diligence which included taking George Lundquist’s Retire in Costa Rica on Social Security Tour and decided to rent in San Ramon where they have been living since April of 2009. Gloria loves to write (and is quite good at it, I might add). She keeps in touch via regular newsletters, and she openly shares information about living on less in Costa Rica, including their own Cost of Living details. She also maintains a listing of homes for sale for under $150,000.

We visited Paul and Gloria again during our 2013 exploratory trip, and got to spend some quality time with them was one of the highlights of that trip. We signed up for one of Paul’s day trips, intending to explore small towns between Palmares and Atenas. Then, during breakfast on the morning of the trip, we started talking about Lake Arenal. We were intrigued and asked Paul if he would mind taking us up there instead if we covered his gas in addition to the cost of the day tour. He agreed, and off we went on a great adventure.

Please provide your contact information so Paul and Gloria will know we sent you their way.